Whole body cryotherapy (WBC) is the brief exposure to extremely cold air in a custom temperature (-110 to -196°C) and humidity controlled cryo-sauna or cryo-chamber. Exposure duration is usually kept around 3 minutes. During exposure, a minimal amount of clothing is worn for safety. 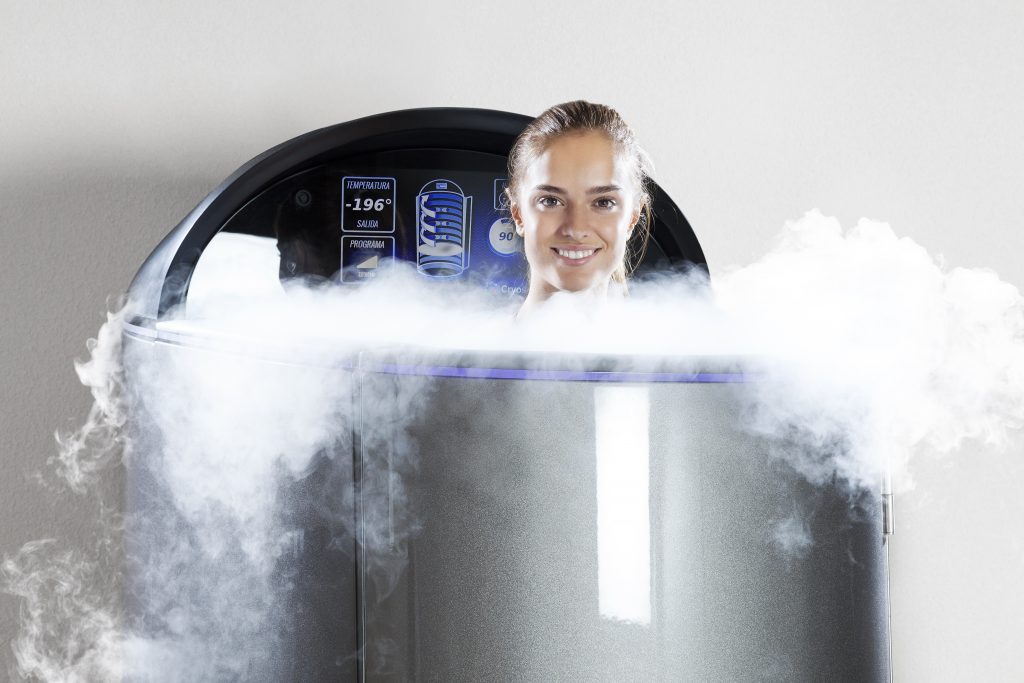 The Effects of Whole-Body Cryotherapy

Studies have demonstrated that engaging in WBC increases the levels of anti-inflammatory interleukins, proteins important for immune and inflammation responses, while also lowering secretions of pro-inflammatory signalling molecules.

Acute and chronic elevation of Interleukin 6 (IL-6), a protein produced and released by muscle cells in response to muscle contraction, has significant pro-inflammatory effects. According to one study, pre-exercise WBC prevented IL-6 spikes in male volleyball players (6). The same study demonstrated a potentially protective effect against the post-inflammatory cascade following exercise.

Another study indicated that repeated WBC (2 sessions a day, for five days) in the setting of daily exercise kept IL-6 at the baseline compared to that of passive recovery (9). These same sessions resulted in a 60% decrease in serum TNF- α, an inflammatory biomarker linked to cases of Type 2 Diabetes, Alzheimer’s and cancer.

In a randomized control study, Hausswirth et al. saw that a single WBC session immediately after EIMD not only relieved pain, but also prevented muscle swelling and facilitated faster muscle strength recovery just 72 hours post-EIMD. The control group in this study did not recover from muscle swelling and pain until 24 to 96 hours following EIMD, and even at that, muscle strength was still depressed from the baseline 96 hours post-EIMD (15). In other words, the WBC group managed to recover muscle strength faster than control group because they decreased inflammation and all EIMD symptoms by using WBC after their workout. The study results show that control group didn’t recover from EIMD and muscles were not able to regain strength 96 hours after workout, as amount of post exercise recovery wasn’t fast and/or long enough for control group.

All bodily processes produce oxidants in the cells. High intensity exercise produces more oxidants within the intracellular space. Initially, the cells respond through the production and utilization of antioxidants in order to prevent damages to proteins and DNA. However, as oxidants begin to overwhelm the intracellular space, they damage the cell membrane and are subsequently released into the intercellular space, or outer cell in a process known as Oxidative Stress. When a large number of cell membranes are damaged by these oxidants, resulting in a local inflammatory response.

Increases in inflammatory marker creatinine kinase (CK) increases with muscle damage. This often indicates excessive physical workloads and possible overtraining. One study on kayakers showed that those who engaged in WBC had decreased levels of CK, in comparison to other kayakers who did not do WBC.

The release of norepinephrine positively alters pain, metabolism and inflammation processes: it increases heart rate, blood flow, blood glucose level, and the pro inflammatory response at the initial phase of stress as well as the anti-inflammatory response after the stress ceases. Norepinephrine is stimulated by stress; its goal is to prepare the body to fight cold stress by delaying the sensation of pain and partially triggering brown adipose tissue which utilizes blood glucose and stored fat to generate heat. Long-term studies in humans show that WBC exposure at a temperature of -110°C for 2 minutes, 3 times per week in a 12-week period dramatically increases plasma norepinephrine, which is beneficial for immune system, by 200-300%, and did not decrease with habitual exposure to cold (2).

According to the findings of various studies (4)(5)(17), severely overweight or obese individuals are more susceptible to cooling than individuals with average weight. Similarly, males and females appear to respond differently to WBC exposure; females tend to have higher levels of adipose tissue than males and therefore experienced a greater degree of skin cooling.

The interaction between body and cryo-sauna occurs principally on the skin, and skin temperature directly reflects the balance between heat-loss to the environment and heat deposited by metabolically active tissue. Skin temperature has been shown to reduce significantly immediately after WBC exposure and then increase up to 1 hour after exposure, with concomitant decreases in muscle and core temperature.

Heat transfer mechanisms and processes depend on several factors including size of the contact area, the difference in starting temperatures, and the heat capacity of each material. Thickness of adipose tissue also affects cooling time, with thicker skinfolds requiring longer exposures to than thinner skin folds to produce a standard temperature in deeper tissues. With WBC, differences in magnitude of cooling have been observed in individuals with a high body mass index (BMI) compared to those with a lower body mass index.  The highest magnitude of temperature changes was observed within lower extremities (tibias: −8.7°C; feet: −5.2°C), the mean total body temperature decreased by 5.8°C, while the internal body temperature dropped only by 0.8°C.

Common with exercise and the process of energy metabolism, one of the side effects of burning fat is the production of harmful Reactive Oxygen Species (ROS). ROS damages DNA, which is a process linked to aging; an oxidative damage process of DNA that accumulates with time as well as age-related diseases. Exposure to cold temperatures activates very potent antioxidant systems, such as glutathione reductase and superoxide dismutase. Referencing the study on kayakers, those who were exposed to WBC for 3 minutes at a temperature of about –120 to -140°C over the course of 10 days had a 36% increase in superoxide dismutase levels and a 68% increase in glutathione reductase levels (6)(11)(12).

Functional recovery is defined as a return to the baseline following exertion of any form in terms of strength, pain and subjective fatigue.

Hausswirth et al. found that undertaking WBC immediately, or 24 to 48 hours after intense trail running resulted in significant improvements in strength, pain and subjective fatigue compared to the untreated control group. Ziemann et al. also found improved performance associated with WBC within a group of elite tennis players. They found that athletes that were subjected to daily WBC exposure of -120°C, twice a day, during a 5-day training camp had managed greater shot accuracy during two testing sessions, compared to the untreated control group. A single WBC exposure (3 minutes at -110°C) enhanced subjective and metabolic recovery, based on blood lactate and VO2max levels, after intense bouts of swimming, compared to the control group using passive recovery (9)(10).

Heart Rate Variability (HRV) is the variation in the time interval between consecutive heart beats in milliseconds. It is affected by exercise, hormonal reaction, metabolic processes, stress and recovery. HRV is typically higher when heart beats are slower, and lessens when the heart beats faster, during stress for example. Studies show that WBC between two sessions of exercise resulted in increased HRV, a trait associated with reduced morbidity, mortality and improved wellbeing. Higher HRV is linked to improved performance, regeneration, recovery, less strain during activity, and more sufficient responses to stress (13)(14).

In one study, participants with adhesive capsulitis (frozen shoulder) were chosen randomly to receive either physical therapy or physical therapy with WBC. After 4 weeks of treatment, the group exposed to WBC had significantly greater improvements in terms of pain, shoulder function and range of motion (ROM).

Another study took patients with osteoarthritis and subjected them to sessions of WBC over 10 days. The results showed improvements in the conditions of 78% of the participants. Similarly, six studies examining a total of 257 patients with rheumatoid arthritis show results of significant pain reduction measured by visual analogue scores, as well as improvement in Disease Activity Score in 28 joints (DAS28) after chronic cryotherapy (16).

WBC has beneficial effects on the lipid metabolism in both the physically active and obese population. Lubkowska et al. examined 69 physically active males who underwent 20 sessions of WBC over the course of 20 days, and found that triglycerides significantly decreased, while high and low-density lipoproteins (HDL and LDL) significantly increased. The same results occurred in a 2015 study by Lubkowska at al., while examining 45 overweight and obese men after 6 months of moderate aerobic activity and WBC. It was reported that while body mass, body fat percentage and lean body mass percentage did not change, LDL and triglycerides decreased, while HDL increased (4)(5).